Conversational Styles: Is it better to be considerate or direct?

HAVE YOU EVER FELT BULLDOZED BY A COWORKER WHO KEEPS PIPING UP DURING A BUSINESS MEETING? OR MAYBE IT’S LIKE PULLING TEETH GETTING YOUR SIGNIFICANT OTHER TO DISCUSS HOW THEIR DAY WAS, EVEN THOUGH YOU ALWAYS SHARE YOUR FEELINGS WITH THEM. IF EITHER OF THOSE SITUATIONS SOUNDS FAMILIAR TO YOU, YOU’VE ENCOUNTERED A DIFFERENCE IN CONVERSATIONAL STYLES.

Direct conversationalists tend to express their emotions in a (you guessed it) direct manner. This is the style most associated with white Europeans and Americans. Americans are, in fact, so direct that even their European counterparts can often be caught off-guard by blunt questions or even a customer complaint that was delivered in a polite way by American standards.

Deborah Tannen, the godmother of all things conversational, explored style in relation to ethnicity by comparing the reactions of Greeks, Greek Americans, and non-Greek Americans to a made-up conversation between a husband and wife.

The participants were asked to extrapolate what the husband had actually meant in the above conversation. They were given two options:

Greeks chose the first, indirect option almost half the time, while Americans only did so a third of the time. Greek-Americans were less predictable, though they had a far higher rate of choosing the indirect option than non-Greeks.

Yet even within America, directness can have a profound effect on our conversations and subsequently, our relationships. Think of a New Yorker and a Midwesterner discussing their day at work – there would be a difference in the storytelling. We’ll come back to this idea in the next section.

Below is comedian John Mulaney discussing why he finds more success in his relationship with a woman who speaks more directly than his previous partners had, and how different it is from the conversational style he learned growing up. [Warning: It’s not exactly a politically correct bit, but I hope readers will appreciate how we identify this trait in others.]

Indirect speech can cause difficulty in the workplace, as well. Tannen uses an example from an airplane’s black-box recording in which a co-pilot was indirectly communicating to the pilot, who did not comprehend his conversational style. 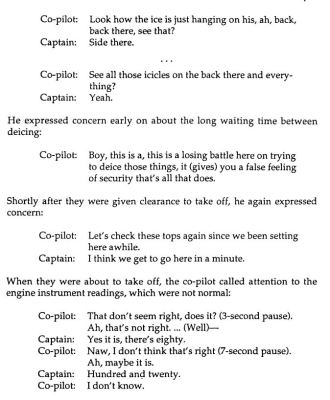 37 seconds later, the co-pilot told his captain, “We’re going down.” “I know,” replied the captain, only moments before impact. There were no survivors. Acknowledging and processing different conversational styles, particularly when there is a mismatch in social status (whether because of job position or other factors like gender, sexuality, or ethnicity) between two coworkers, is vital to communication and, in cases like the one above, to survival.

One of Deborah Tannen’s most well-known studies involved a dinner party with New Yorkers and non-New Yorkers. There are several elements to each style that can help you identify which you might notice in your own speech.

High-involvement speakers take less time between turns in conversation, speak more quickly, participate in cooperative overlaps (speaking simultaneously), use minimal responses (“hmm” “oh yeah”) to indicate active listening, and collaborative floors (a speaker may jump in to continue the “turn” of the previous speaker, like when telling a story both speakers were present for).

High-considerateness speakers leave more room for other speakers to take their turn and may find cooperative overlaps, minimal responses, and collaborative floors as rude or an indication that the listener wants them to stop speaking.

This difference in conversational styles can become an obstacle in conversations within a friendship, relationship, or work situation. Women tend to value a considerate form of speech, while men find that high-involvement encourages conversation. Of course, depending on this “trend” can feed into stereotypes and cause problems like those we will discuss in a moment. 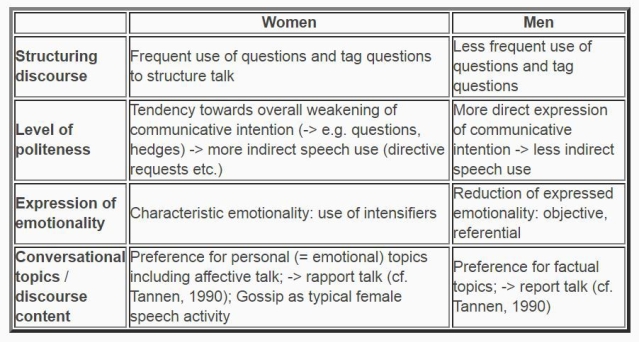 A quick look at the differences in conversational styles by gender via English Language and Linguistics Online, citing Deborah Tannen.

What style a person possesses can be affected by where the person grew up, their cultural or social background, and any number of other environmental factors like what jobs they’ve had in the past or how many siblings they grew up with. Labeling someone’s conversational style can be further complicated by the progress of the LGBTQ community and the fluidity of identity encouraged in many pockets of developed countries.

In fact, most people switch between styles depending on the circumstances. In the transcript below, you can see that, when only women are present for a conversation, they often fall on the side of high-involvement instead of their more (stereo)typical tendency for high-considerateness. 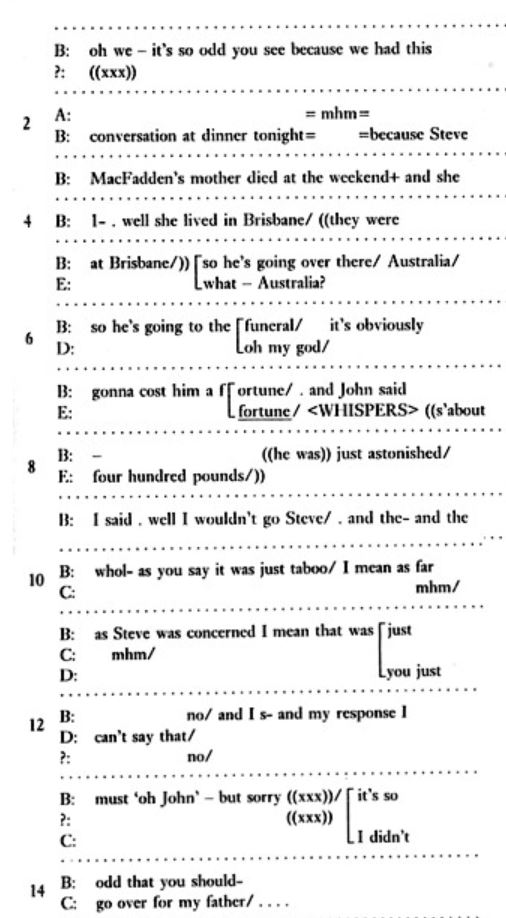 This difference in style can be dangerous territory for international relations. Asian cultures value consideration, while European conversationalists appreciate involvement. Think of World War II, where Germans, Americans, and Japanese negotiated about the path of the war – it is impossible to imagine that there weren’t any misunderstandings based on talking over each other or not waiting for the others to speak. A vital aspect of training translators and diplomats in the United Nations is teaching them to appreciate these differences in style in order to avoid unnecessary conflict.

So which style is the most desirable?

High-considerateness and indirectness are both considered the “polite” styles. You can often identify them within cultures that put emphasis on respect (e.g. Japanese, Korean) and social groups that are valued when they exhibit good manners and a pleasant, gentle nature (e.g. women, lower-level employees, children).

However, these speakers are frequently at a disadvantage: they often receive negative feedback for straying from these norms but may have difficulty moving up in the workplace or at school, expressing their frustrations in a relationship, or communicating effectively with different nationalities. Those with a direct style are more likely to be successful in professional settings.

So do indirect, considerate speakers need to suck it up and learn new styles to move up in the world, maintain a healthy relationship, or avoid international catastrophes? Or should direct, involved speakers learn to pick up on the features of other styles and react accordingly? Why are direct speakers so much more likely to get ahead in a professional setting?  Is this something speakers can use to code-switch? Let us know your thoughts!

Which American accent is the hardest to copy?